Tom and I went to school together at the Art Institute of Boston. We had our thesis show together and painted the floor sky blue in order to set off his massive installation. I hadn’t seen him in seven years when I ran into him outside the Key Foods in Bushwick in 2013. We’ve always been drawn to each other’s work and since reconnecting have picked up where we left off. I visited his studio in Queens the other day and was blown away by his new paintings. Tom works with a variety of materials, casting bronze and cement, welding, incorporating found objects, but has kept up a steady interest in painting, returning to it with freshness and sincere curiosity each time.-Brandi Twilley

BT: The popular culture references I see pop up in your work such as Freddy Kruger, Marilyn Monroe, or Pikachoo always seem to hit the right note for me. What do they mean to you?

TK: Hah! Its funny to me really, yea they are existing cliche icons of popular culture and a stripped down version of more complicated ideas like fear, desire, or power.

BT: I think that you have a poetic touch with words and phrases that are a part of your paintings and sculpture. Even your stream of Instagram hashtags become like poetry. What are your thoughts about the use of text?

TK: LOL the internet is such a garbage pit! My war with words comes from being fed up with abstraction. I went through a long stretch where I felt abstraction had become this fucked up sham idea of style and a purely decorative regurgitated trap. I wanted to paint with reason and meaningfulness. This became a way to give myself a clearer objective and the viewer a direction. Some might object to words and phrases but like the cliche icon it already served its purpose… 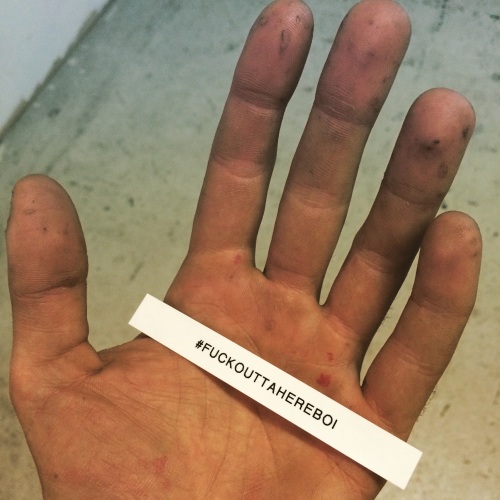 BT: What artists are your all time favorites? How do you feel about letting influence into your work from artists of the past or from work that’s going on right now?

TK: Yea I like all the big dogs of cors and most American Artists really. Calder is my favorite, I was very influenced by his ability to show character through his work. He is a bit overlooked cause of his mobiles. His primary color works have always attracted me. Lately I have been very influenced by contemporaries I look up to and work with. I have been fortunate to know very sickk artists living in NY, they aint fake hyping. They care immensely about the work itself and its reassuring when your surrounded by a bunch of NY artist fuckbois n clueless motherfuckers. That may sound harsh but shit you can see right through some of these cats, they aint built for this shit.

BT: You have mentioned the problem of ambivalence in your practice. Tragic events from the news that you feel compelled to engage with make you aware of an absence of emotional connection, that you either want to overcome or accept. What are your thoughts about that at the moment.

TK: I wrestle with making art in general it is important to me but when you hear about how horrible the world is it all seems futile. And I really cant talk about the stuff that doesnt effect me directly. Its like wanting to talk about God. You may feel inclined to but nobody wants to hear it from you. Shit, you cant talk about war and tragedy because you just some fuckin white privileged bum artist. I believe these harder experiences people have to face are reality or closest thing to it and we are lucky and disgusting for living our lives this way, Away from it and guarded from it and in alot of cases causing it. We live in a fake reality. I dont want to make art about brunch, jerking off or Love So im forced to be the guy who rubs our own nose in the piss, i come around and point out quirky lame shit and call it art when people are fighting to stay alive elsewhere. Fuckin’ American PIGs in shit. We got it so good tho its laughable. Maybe thats why i feel a bit shameless, overcompensating for my ignorance.

BT: You currently run Hood Gallery, have a studio in Queens, work for Ramiken Crucible as an art handler, and work doing fabrication for…How does all of that affect your work?

BT: How long have you lived in New York? How have your thoughts about being an artist in New York changed over this period of time?

TK: Been in Brooklyn for 7 years. Its huge to live here and be able to create work. The landscape here has had a big effect. My first 2 years I just partied and made forced unsuccessful works on the low. It took along time to get back to feeling full hearted in creating work. There is not much unity in New York because everyone is here on some kind of mission. People act like you want somthing from them, or write you off as a Nobody with nothing to give. Its NY attitude and desperation that has kinda posed me outside the scene. Its refreshing to be the nobody, its nothing new to me and I intend to be the greatest nobody.

BT: Where did the name Hood Gandhy come from? How do feel about using a pseudonym? How does that function as a part of your identity?

TK: Hood Gandhy was a name I dubbed myself when I was like really trippin on some Brooklyn shit. At the time i was trappin all day, had a dope chick I was like dam i need a name for this shit. So I was always tipping people well and throwing locals a free smoke like giving back to the community in that shitty way so i figured i was really like Gandhi for doing so. There ya go, Hood Gandhy -spelled with a Y like why did Bush knock down the Towers?

BT: What are you making right now?